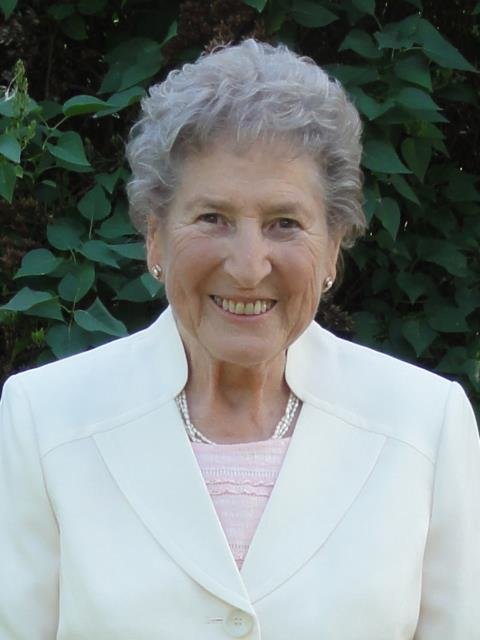 Watch the recorded version of the service https://www.ustream.tv/embed/recorded/121768600?html5ui

Ennis Waldner (née Faithfull, Feb 11, 1925) passed into the presence of her Heavenly Father on April 30, 2019, with her children by her side. Ennis, having lived a full and rewarding life, will be reunited in heaven with her beloved husband, Alex, and her son, Glen.

Born in Saskatoon, Ennis was the fourth child of Firechief John Faithfull and his wife Mabel. Ennis worked at Woolworth’s Department Store, Hollywood Studios, and eventually spent the rest of her life volunteering and working in the field of aquatics. She taught swimming to public school classes at the YMCA for twenty years, and then was a sessional lecturer at the College of Physical Education for 18 years. While at the U of S she was in charge of the Aquatic Program, and founded the synchronized swimming team.

Ennis’s future husband, Alex, first noticed her while she was competing in speed swimming at the old Avenue H Pool. However, it was while skating in the old Arena that they first met and fell in love. They had a “letter courtship” for three years while Alex served overseas during WWII. On his return, they married in 1946.

Ennis spent much of her life volunteering. She volunteered with the Red Cross for over 70 years, including serving on their local, provincial, and national boards. Much of her time with the Red Cross was in the Water Safety Program. She taught swimming lessons and instructor courses, as well as developing programs. Ennis was the President of the Royal Life Saving Society for SK. With the RLSS, she trained and examined lifeguards and instructors, and served on the National Technical Committee. Additionally, Ennis served on the Board of Directors for SK Parks and Recreation Association and the Saskatoon Recreation Department. As well, Ennis and Alex enjoyed volunteering at their church, Western Development Museum, and the Veterans’ Home.

Ennis and Alex spent many happy holidays bonding with their family at Little Bear Lake. They also enjoyed many adventures travelling and exploring the world, often to visit their children and family who had moved to South America, Africa, Europe, New Zealand, Australia, and the Caribbean.

Ennis always said that before she died, there were two things she wanted to do: play the organ and take painting classes. After retiring, she accomplished both with proficiency. Ennis always regretted not being able to finish high school due to her father’s death and the need to help support her mother. However, at the age of 88, she was able to finally fulfill her dream and became Canada’s oldest distance learning high school graduate.

A service celebrating Ennis’s wonderful and accomplished life will be held on Monday, May 6th, 2:00PM, at the Louise Avenue Congregational Church (1602 Louise Ave). In lieu of flowers, donations to the Red Cross will be gratefully accepted.

Share Your Memory of
Ennis
Upload Your Memory View All Memories
Be the first to upload a memory!
Share A Memory