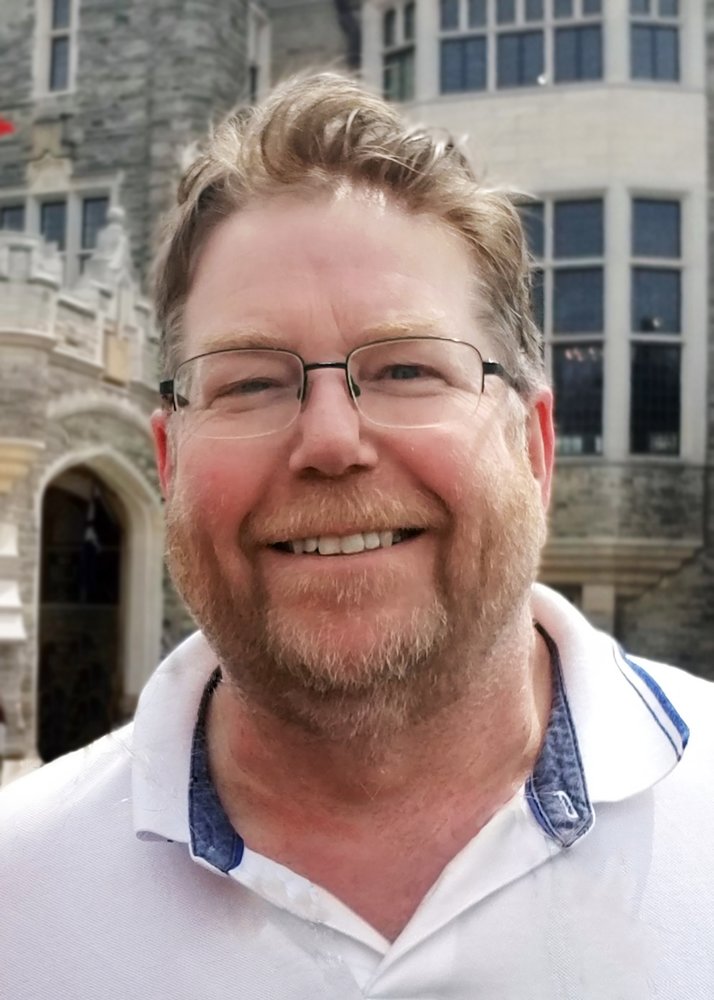 David “Dave” Ingham passed away on Thursday, June 13th, 2019 at the youthful age of 60. He was surrounded by his loving wife, Debbie Gsell-Danilkewich, and children, Ryan and Kelsey Gsell. Dave will also be affectionately remembered by his older sister Loren Kay and her partner Grant Becker (Lipton, SK), his younger brother Eric Ingham and wife Brenda (Maple Creek, SK), along with several nieces and nephews all around the world.

Dave was born on April 29th, 1959 in Kincaid, SK to parents Bill and Alice Ingham (predeceased, of Kindersley, SK). Dave attended elementary school in Kincaid, before the family moved to Kindersley where he completed grades 5 to 12. During this time, he was a member of the Scouts, Venturers, and Armed Forces Junior Cadets. After graduating from Kindersley Composite High School in 1977, Dave began to get involved with construction and manufacturing. He moved to Saskatoon in 1980 where he began his lifelong career in agricultural manufacturing. He started on the shop floor at Smith-Roles, which later became Harmon International. Dave’s ability to solve problems and create efficiencies  quickly moved him into the plant planning offices. He then moved to Flexicoil in 1997 as a production planner. A few years later Flexicoil was acquired by Case International and then New Holland (CNH). During the majority of his time at CNH, Dave was a master scheduler, but in recent years began using his talents to improve the operation and efficiency of the plant, as a world class manufacturing (WCM) project coordinator and supervisor. This even led to some international travel to other FIAT manufacturing plants.

Dave met Debbie, the love of his life, during Loren’s family Thanksgiving get together in 1999. Dave later surprised Loren and the rest of the Ingham family when he showed up with Debbie and the kids to Perch Lake’s Y2K New Year’s Eve Party. Loren was both delighted and chagrined, as Dave had led her to believe that her plan of setting them up had failed. After a three year long-distance relationship, they moved to an acreage outside of Saskatoon where they lived until moving into the city in 2015.

Dave was an incredibly caring and supportive partner to Debbie and an amazing father and role model to Ryan and Kelsey. He was so proud of all of their achievements, constantly talking about them to his colleagues at work, and anyone that would listen. This was often the Coffee Crew, a group of coworkers that would come to work early to drink coffee together over lively discussions, where Dave loved to play devil’s advocate. Dave stayed connected to his Kindersley roots, attending rock concerts with his childhood friends, as well as birthday parties and school reunions. Dave also looked forward to yearly hunting trips with three of his closest Saskatoon friends. Their bounty offered Dave the opportunity to experiment with different recipes, and often he would try making new things for his family and friends to try. Another of Dave’s favorite traditions included a fireworks show that he would put on with Eric. Every August long weekend Dave, Loren, and Eric’s families get together at Perch Lake for campfires, activities on the water, and of course their infamous fireworks show.

Dave’s greatest joy in life was spending time with Debbie. They were dedicated fans of the Saskatoon Hilltops, going to all of their at-home games. They attended Shakespeare on the Saskatchewan almost every year, and had started taking vacations to warmer climates, even though Dave’s version of a tan is a bright shade of red. He spent so much time around Debbie that he even caught the gardening bug, which we’re sure he would sheepishly admit.

Dave was taken from us much too soon, but lived his life fully. We invite you to a Celebration of Life on Friday, June 21st at 2pm at Mayfair United Church (902 - 33rd Street West, Saskatoon).

Tributes in memory of Dave may be made to the RUH ICU Staff Fund at Royal University Hospital (103 Hospital Drive, Saskatoon, SK S7N 0W8) as a way to thank and acknowledge the staff for their unparalleled compassion and tireless efforts during such a difficult time.

Share Your Memory of
David
Upload Your Memory View All Memories
Be the first to upload a memory!
Share A Memory