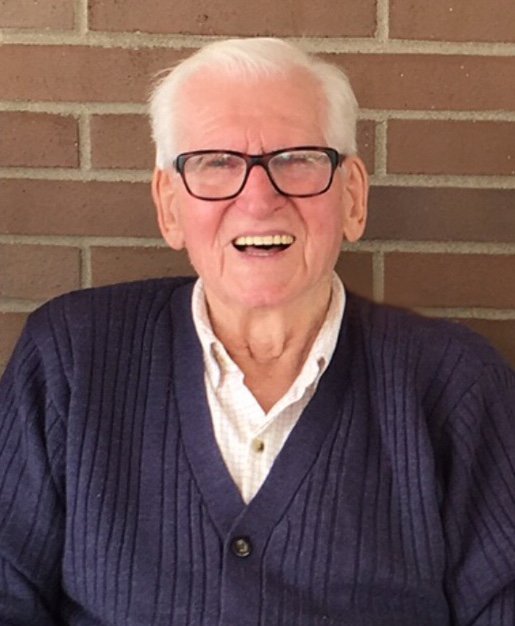 Please share a memory of John to include in a keepsake book for family and friends.
View Tribute Book

John David Gill was born March 28, 1922 in London, England and passed away on August 28, 2019 with Peggy, his wife of 76 years at his side. John was predeceased by his son David in 2000. He is survived by his sister Catherine Larner, his wife Peggy, his daughters Margaret ( Fred ) Nicholson and Valerie (John) Webb; by grandchildren Joanne (Ron) Harbottle, Kendra (Ed) Patzwald, Caroline (Christopher) Ogston, Evan (Cathy Billington) Webb, Roxanne (Kyle) Berting; by great- grandchildren Alicia Harbottle, Abigail and Theodore Patzwald, Fiona and Wyatt Ogston, Audrey Webb, and Eric and Callie Berting; and by daughter-in-law Leanne Gill and her son Wade Brown, and many nieces and nephews in Canada and England. John and Peggy and their children emigrated to Canada in 1957. John was employed as a caretaker by the Saskatoon School Board until his retirement. He was a Life Member of the Royal Canadian Legion and he and Peggy were among the founding volunteers of Saskatoon Folk Festival, members of “The Georgians” Choir and Orpheus 60 Choir. John loved music and gardening. He and Peggy enjoyed several years of travelling in Europe and beyond, and cottaging at Buffalo Pound Lake.
We are grateful for the friendship and support John and Peggy were given over the years by their neighbours, and the kindness and care John received in his last weeks from the staff of St. Paul’s Hospital Palliative Care Unit. A family gathering will be held at a later date.

Keep singing Grandad, we hear you