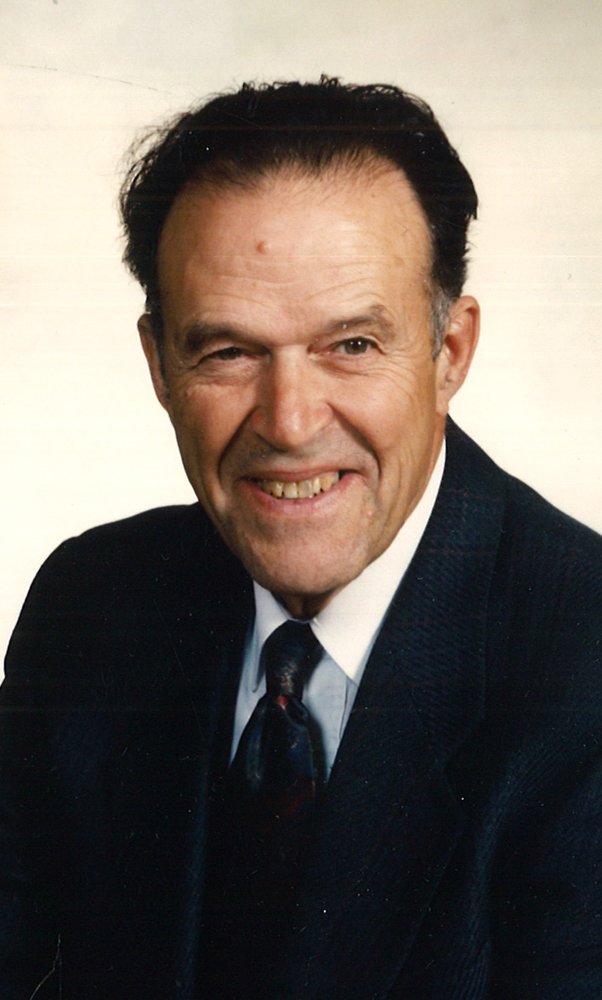 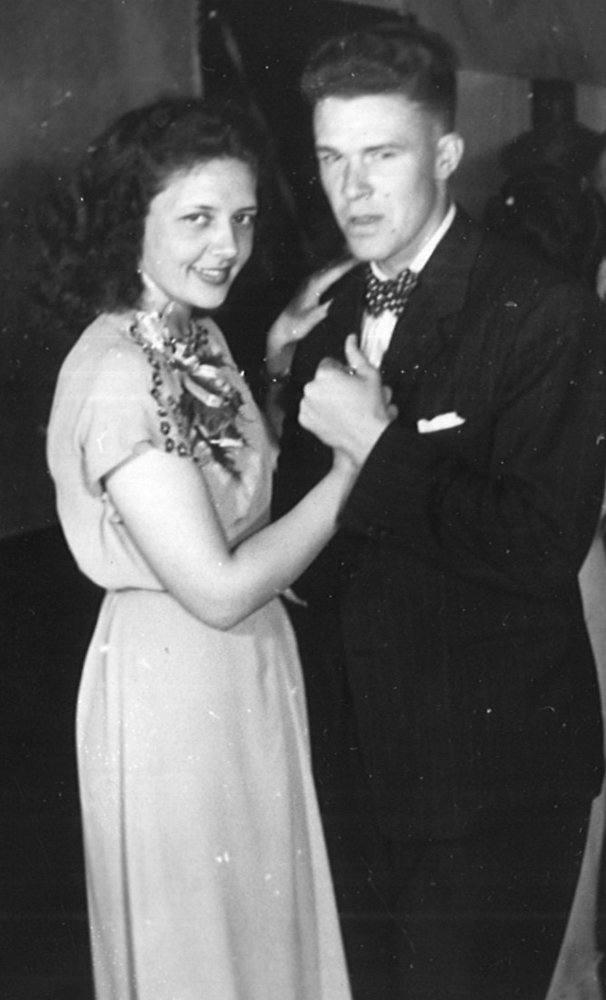 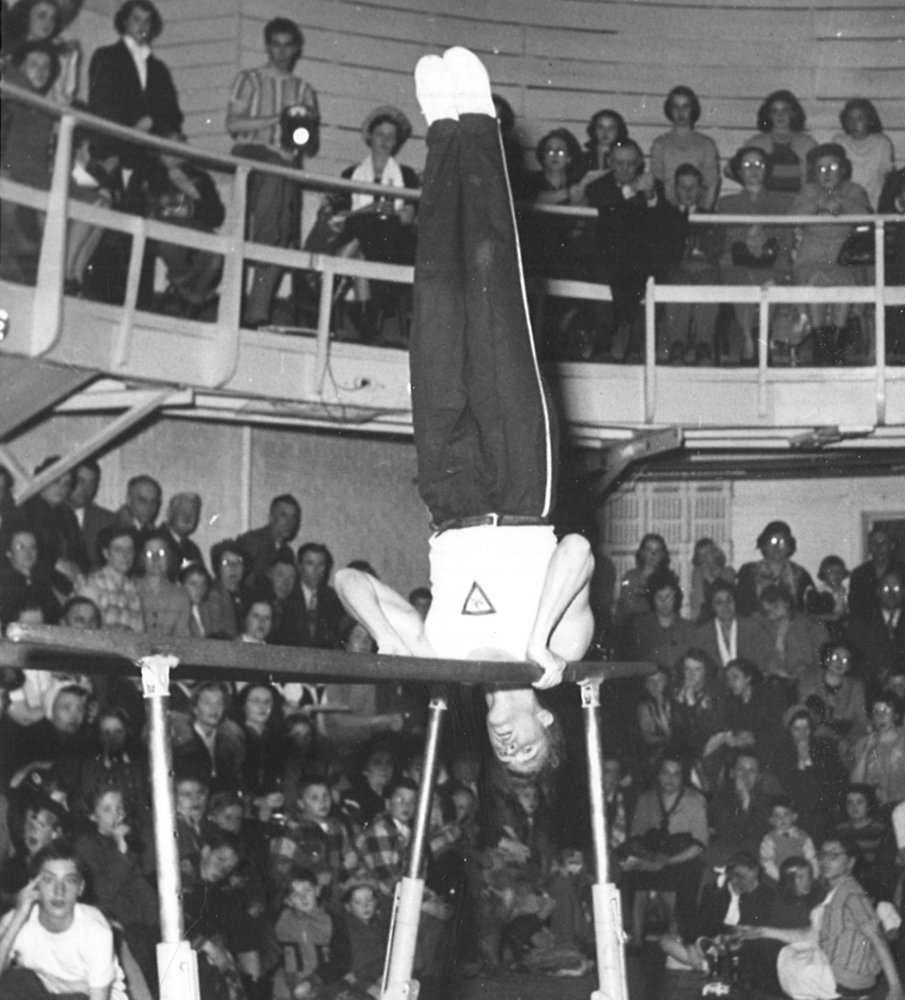 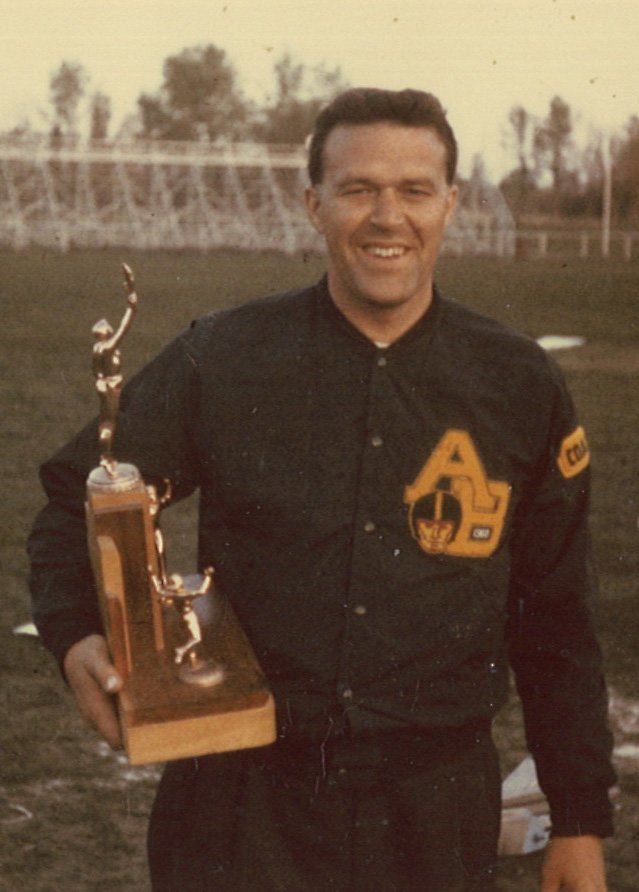 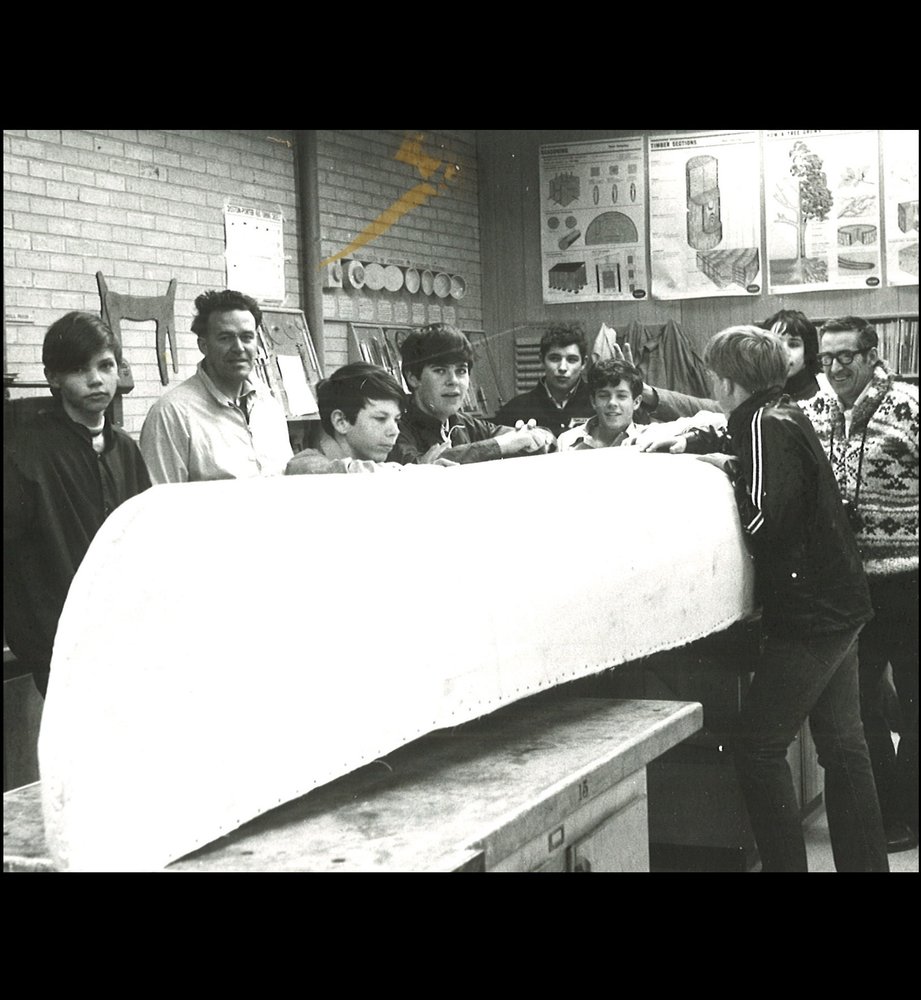 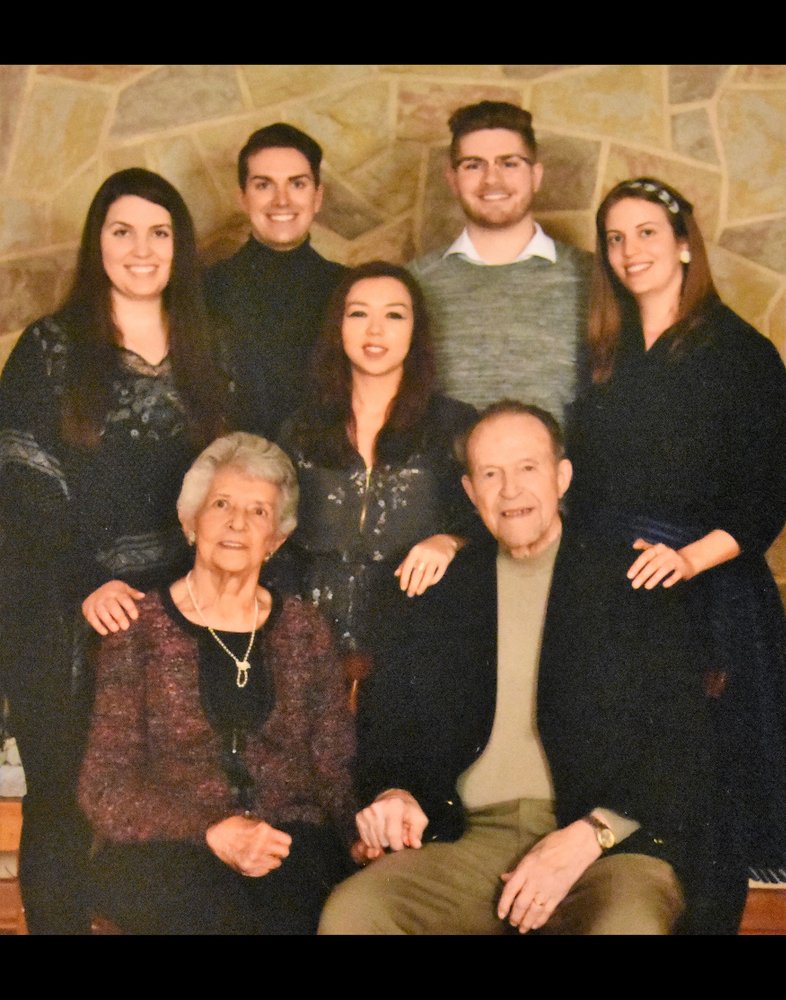 Ron Perkins was truly a great role model for us all.

Ron was born on the farm at Star City, Saskatchewan. He was the youngest growing up amidst a family of five sisters and a brother. Ron started his schooling at McAllister Elementary, a one room country schoolhouse, going there for the first four years before moving from the farm to Prince Albert. There he attended Prince Edward Elementary and Prince Albert Collegiate Institute, PACI. It was here at PACI he met Betty Ann Helgeson, his high school sweetheart.

Ron was very athletic and played numerous sports while growing up. He took turns at gymnastics, basketball, six man football and track. After high school he attended Teachers College for a year, taught for a year at Star City and then went to Brandon where he worked at the YMCA while taking classes at Brandon College.

It was then in 1951 he married Betty Ann and moved to teach two years in Meadow Lake, then taught two years in Sturgis all the while taking Summer School classes. Having saved enough money he then enrolled for a year at the University of Saskatchewan. Upon completion of that year he was hired by Saskatoon Public School Board as a Physical Education teacher and coach starting his career in Saskatoon in 1955 at City Park. His football mentorship began working along side Dr. Bob Arn.  Dr. Arn showed Ron what it took to build a successful football team. Then in 1958 Charles Mair, principal of the new Aden Bowman Collegiate came calling and recruited him to the Bowman Staff. Ron recognized the most important thing about going into a new school was building a four house system that competed for awards. The students concentrated on participation and therefore building the foundation for team spirit. They had hundreds playing at house level, it was fun and it paid dividends.

Track and Field athletes at Bowman will remember Ron Perkins and Bob Adams as the coaches for thirteen straight Saskatoon Highschool Championships. The story for track was Ron and Bob coaching for Bowman after school and then coaching the Saskatoon Kiwanis Track club after supper.
Ron’s football teams at Bowman were always competitive and will remember three trips to the Saskatchewan Highschool Championships, 1962,1963 and in the 1970 showdown when Bowman emerged triumphant. Ron also worked at building and promoting sports like gymnastics and wrestling, encouraging students to become involved.

Ron filled many administrative roles with the Physical Education Programs before advancing into School Administration becoming Vice Principal at City Park from 1972-74, Principal at Nutana from 1975-82 and then his last two years at Mount Royal before retiring.  Ron learned to see the whole picture in Education, but it was still a matter of working with people. At Nutana the school population was small and he knew everyone by first name. At Mount Royal the school population was 1900 students. It was more important to make sure a staff of 100 teachers were encouraging the students to be involved, to make sure the students were getting everything they deserved.
Over his career Ron witnessed an explosion in schools and programs which were available. Students changed too. As he worked with staff and students he believed in consistency in discipline. The students would accept it as long as they knew the rules tomorrow were going to be the same as they were today. Ron was fair but firm. As a coach he required commitment and more than once a practice went over schedule until things were executed properly.

Ron’s life was grounded on strong values. Honesty, integrity, reliability, he treated people with genuine respect putting forth his best effort and expecting those around him to do the same. He had the ability to recognize and bring the best out in everyone. Whether in the class room or the gymnasium he encouraged youth to find their full potential and more. Ron retired from his teaching career in 1984 at the age of 55. He felt it was time for a move and to let some one younger move into his role. He never looked back, Betty Ann and Ron had a long list of things they wanted to do.

Ron’s personal life was no different. He was a devoted husband, his marriage with Betty Ann spanning 68 years. He was a great role model for his sons and his grandchildren. During his youth Ron had been very involved in the Boy Scout Organization. He had found being a Scout and the leadership it provided him growing up had been invaluable. He helped in the development the 31st. Scout and Venturer Troops, an activity that involved many young people including his two sons. This lead to large blocks of his time as a leader and mentor. There were weekly meetings, weekend camping both summer and winter and summer canoe trips in the north. He was always ready for a challenge.

Ron and Betty Ann were very involved and devoted members of St. Timothy's Anglican Church for many years. Ron was a very spiritual person.

Ron’s retirement lasted 37 years and was a full fledged adventure. Once again he had time to curl, an activity that had been put on hold while teaching and he spent countless hours at the rink enjoying both the competitiveness and the comradery. Ron was an avid outdoorsman with a passion for hunting. At the age of 88 he was still excited to sit in a goose blind, watch the sun rise and wait with anticipation for the first flock to set their wings to the decoys. Worth the price of admission he would say. Every day was a good day, every day was a bonus. Now there was more time to golf, more time to ski and time to travel. There were trips with Betty Ann to Ontario to visit Dale and his family and international travel too. Every summer there was time to go to Kimball Lake in the Meadow Lake Park. At Kimball they enjoyed camp coffee, campfires, berry picking and Betty Ann’s cooking. Life was good.

Ron’s youngest son Brian was involved in the cattle industry. Ron spent many hours helping him at the feedlot. He even took on the supervision and administration of the local Feeder Coop which sent him touring the countryside inspecting cattle. It was a great fit for his administrative skills.
Ron was an outstanding Grandfather to his five grandchildren. Not an event went by that you didn’t see Ron and Betty Ann there encouraging and supporting them, fine arts or sports it was all the same. Taking the kids skiing, tobogganing, swimming, offering advice, he was always there. He was an outstanding driving instructor for his grandkids, fearless.

Looking back Ron’s perspective of his retirement from teaching was “ I’m actually too busy to miss it”
A true Physical Education Instructor Ron faithfully had his morning routine of stretching, sit-ups and push-ups well into his eighties. He frequented the pool with Betty Ann for Aqua fitness into his eighth decade as well.

Ron always said “ As a teacher you have to really like your job… Once you don’t like it much the young people realize that right away and they tend to home in on it.” That was never the case with Ron. He enjoyed his teaching career immensely and enjoyed life even more. He brought out the best in all of us. He set the bar high, lead by example and expected you to meet his expectations or more.

Brian’s last conversation with Ron was a recap of his life. A thirty-five year teaching career followed by thirty seven years of retirement which were filled to the brim.
Ron’s comments back were these.  “It was quite a life and I enjoyed every minute of it ”
That’s a great way to remember ninety two years, a good run, no regrets.
That’s exactly how he remembered it.

Ron spent his last 18 months first at Amy McClure House and then at Oliver Lodge. He enjoyed them both, had time to get to know the staff and make some more new friends.

We would like to thank everyone at Amy’s House and Oliver Lodge who made his days so bright.
A Celebration of Ron’s Life will be held some time in the future. Condolences may be left at www.prairieviewchapel.com. Arrangements entrusted to PRAIRIE VIEW CREMATION AND MEMORIAL SERVICES (306) 242-7884.

Share Your Memory of
Ronald
Upload Your Memory View All Memories
Be the first to upload a memory!
Share A Memory