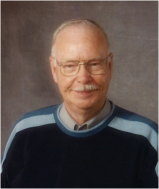 Ron died peacefully on February 21, 2021, at St. Paul’s Hospital Palliative Care Unit.  After two months in hospital recovering from surgeries, Ron was able to be back home at Luther Riverside Terrace, but decided that the mountain to recovery was just too steep to climb and his will was gone after losing his wife, Ruth, on January 13th.  He was grateful to have close contact with family in his final weeks, both in person and by phone and video chat.

Ron was born in Lashburn, SK on September 9, 1928, and grew up on the family farm outside of Maidstone.  He attended school at Maidstone but after Grade 8 his education was sidetracked because of the war.  Ron's older brother, Jack, was in the army overseas so Ron had to quit school and help his dad on the farm.  They were farming with horses, which was very labour intensive.  When his father had a stroke and was hospitalized, Ron and his mother moved to Saskatoon, where his sister, Ida was living.

Ron had a keen interest in auto mechanics and studied many books on the subject.  In 1947, a garage owner took him on as an apprentice.  Ron attended trade school and obtained his journeyman’s certificate.  He started working at Merlin Motors and worked there for close to 40 years.  Ron continued his education, gradually specializing in automatics, steering components, wheel alignments, and brakes.

Ron recently told his family that the highlight of his life was meeting Ruth.  They met on a blind date in the Fall of 1948 and were married in August 1951.  In 1953, Ron and Ruth purchased a lot in Sutherland for $1 and began building their home.  Ruth mixed the mortar and Ron laid the concrete blocks.  They did everything but dig the hole and dig in the sewer and water.  They moved into their new home in August 1954.  After the house was built, Ron took correspondence and night classes and received his Grade 12 diploma.  He also took a Heating Engineering course at Kelsey and obtained a Fireman's certificate.  Ron and Ruth had a son, Don and a daughter, Brenda.

Maintaining his health was always important to Ron.  He enjoyed hiking, cross-country skiing, bowling and more recently walking the hallways of the Terrace.  When the kids were young, nearly every summer holiday was spent camping and fishing in northern Saskatchewan, the favourite spot being Whiteswan Lake.  They started with a tent and in retirement they ended up pulling a 22-foot trailer with a boat in tow.

Ron could fix anything and created inventions to solve many household and mechanical problems.  Their Eastlake condo residents benefited from his oversight of building maintenance.   At the Terrace, he suspiciously began ordering tea following supper so he could fix the metal teapots that never quite closed properly.

Ron was very involved in the lives of his grandchildren.  He played guitar and sang to them, took them to playgrounds, golfed with them and even made a putting green for them in the backyard.  They regularly spent a week at the lake with Brenda’s family, pulling their trailer up to an adjacent site.  His grandsons remember getting challenged with a nickel for every fly they could remove from the trailer.

Ron and Ruth both retired in 1988.  They took many coach tours and cruises.  In 1996 they sold the house and bought a condo (Rivercrest Manor on Eastlake Ave.).  In May 2008 they moved to Riverside Terrace.  Ron and Ruth always enjoyed social times with friends and family.  They quickly made new friends in their neighbourhood and church communities of St. Paul's and Grace-Westminster United Churches and Ron also volunteered on many committees.

A family celebration of Ron’s life will take place at a later date.  In lieu of flowers, memorial donations can be made to Diabetes Canada or the Canadian Cancer Society.

Share Your Memory of
J. Ronald
Upload Your Memory View All Memories
Be the first to upload a memory!
Share A Memory