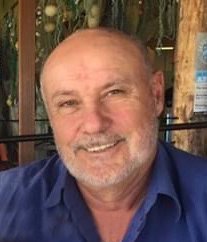 On Saturday, May 1st with the sun shining into the room, Gerry passed away with his loved ones beside him ending his eighteen year on and off cancer battle.  We want to give heartfelt thanks to the wonderful workers within Home Care, Palliative Care and MAID who made it possible for him to stay at home facilitating his final wish.

Born in Kincaid Jul 4, 1950 spending summers in rural and winters in urban Saskatchewan fostered his love of both areas and instilled a work ethic that he maintained throughout this life.  Work took him northward where he fell in love with the lushness and lakes (and his wife) all at about the same time.  With his arrival in Saskatoon he pursued his dream of becoming a pilot; he was successful and took to the sky whenever he could, treating many who had not been in a small aircraft.  During his 35 year career with SaskTel (mainly Saskatoon) he saw many changes from the individual line service program, fibre optics, and the birth of the cellular network with his involvement in all; however his proudest accomplishment was the conversion of Lloydminster from AGT to SGT (TelusSaskTel), on time and on budget with an amazing team who made this possible!  He was also proud to say that he started and was a life long member of Technology Professionals SK, Society of Engineering Technicians and Technologists of SK, and the Junior Achievers being Project Business Consultant for them during their initials years of development.

Along with his dedication to his job, he managed to find time to enjoy and participate in hockey and ball which started in his early years and continued into his later years.  His pleasure in sports carried over to his children instilling in them the enjoyment of the game and to play to the best of their ability. His love of music was evident playing in a high-school, opening for ‘The Guess Who’ when they became storm delayed enroute to a show in Moose Jaw.  Playing tunes, whether live or recorded, with family and friends was always something he enjoyed-this also carried over to his children each getting this gift from him.  He was a fact monger on a variety of topics, good at trivia games and the one people called if they were unable to answer themselves-often in the middle of the night.

Gerry was also a word-smith whether it was speaking at work and/or conferences, story telling, family auctioneering, sharing concepts with ‘the folks’ making a point on the topic discussed; though he also enjoyed stimulating dialogue (BRADLEY) if someone was willing to challenge him on a point then all the better, he loved it all.  He thoroughly enjoyed the opportunities of entertaining and informing folks not only here but with our Australia family and friends when asked to do so.

Gerry will be missed by many however none as much as by Betti, friend and wife for 49 years, son Kyle (Stacey) and daughter Erica (Jesse) and two amazing grandchildren, Dax and Amity.   He was the youngest of six and is survived by Gordon (Shay) of Hazenmore SK and Jean Roemer of Surrey BC plus numerous nephews and nieces.  Gerry was predeceased by his parents Roy and Kathleen (Nancy) Lawrence, siblings Jessie May in infancy, Lillian McLeish, Mabel Rach, Raymond, brother’s in law Melvin Roemer and Ian McLeish.  The shared memories of those still with us and those who have passed, are amazing. In keeping with many happy times, a celebration of a life well lived will be held during the summer of 2022 where his wish to party on will occur.  Gerry was an active member of NASHI Our Children (www.nashi.ca); please consider a donation in lieu of flowers (specify in memory of Gerry).

Share Your Memory of
Gerald
Upload Your Memory View All Memories
Be the first to upload a memory!
Share A Memory