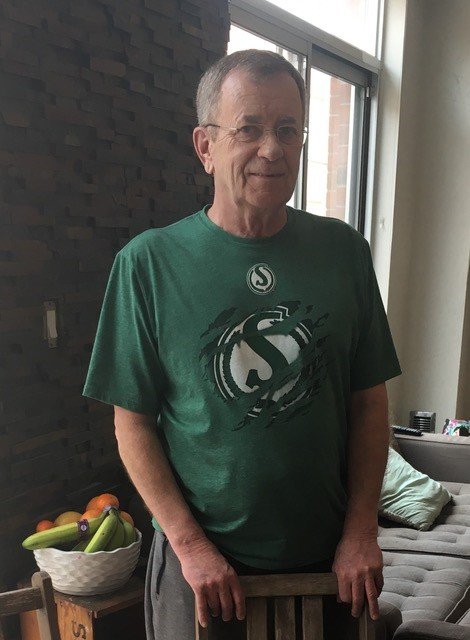 It is with deep sadness that the family of Robert (Bob) McRae Thompson announce his passing on May 22, 2021 in Saskatoon at the age of 67.

Bob was born in Saskatoon on March 17, 1954 and lived in Elrose.  As a young person he was active in many sports, and particularly loved baseball and hockey.  Following high school, he took over the family farm in East Gap District until his retirement in 2011.  The farm was homesteaded by his grandparents, William and Elizabeth Thompson in 1910 and he was proud to continue farming until the 100-year mark was reached.  Following his retirement he resided in Saskatoon.

Those who knew Bob know that he was not always a man of many words.  But it was not long into a conversation with Bob that you would see his genuine, unpretentious nature, his sense of humour, and his keen, sophisticated interest in politics at almost every level and sports.  He was an admirable farmer who successfully ran his farm mostly singlehandedly for several decades.  After retiring to the city, Bob maintained a strong connection with the land and with rural life, visiting his acreage near Saskatoon often and tending attentively to his yard and garden.  Those who knew Bob well would say that he was, through and through, a kind person at heart … and he sure loved his cats!

Bob will be lovingly missed by his family: his sister, Joan Thompson of Ottawa and husband Sami Aly; his nieces, Jillian Moores (David) of Chelsea, Quebec and their children Margot and Maxime, Erin Moores (Vincent) of Ottawa; his nephew, Ian Moores of Toronto; his step-nieces, Heba Aly (Alex) of Geneva, Switzerland and Ameera Aly (Jess) of Ottawa; and his step-nephew, Kareem Aly of Toronto.  Bob was pre-deceased by: his mother, Dorothy (McRae) Thompson; and his father, William Ronald Thompson.

His city-kid nieces and nephew have fond memories of many visits to Saskatchewan over the years, experiencing farm life (riding in the combine, learning about farming and grasshoppers), camping at Clearwater Lake in Bob’s renovated 1960s bus camper, reunions at Elrose, and enjoying time with Saskatchewan friends.  As a result, the farm and prairie life have a special place in their hearts.

Bob was diagnosed with cancer in the summer of 2020 and was undergoing treatment at the Saskatoon Cancer Centre.  The family would like to express our deep appreciation to the many health care providers who supported Bob through this period, including his family doctor, Dr. Carlo Di Gregorio, his oncologist, Dr. Manna the and the staff at the Cancer Centre, the nurses and support staff at the Saskatchewan Health Authority, his pharmacist, Don Locke and other caring medical professionals who supported him along his journey.

Cremation is on May 26th and will be followed by a close family memorial that will take place in Ottawa.  When the time comes, the family would like to organize a celebration of Bob’s life in Elrose and will be in touch with friends and family at that time.

Friends are invited to place comments on the tribute wall of the Saskatoon Funeral Home.  For those who wish to do so, donations to a charity of your choice in Bob’s memory are welcome.  Bob supported many charities including, but not limited to, the Saskatoon Food Bank, the Friendship Inn, Prairie Harm Reduction, Cancer Foundation of Saskatchewan, YWCA and Canadian Blood Services Saskatoon.