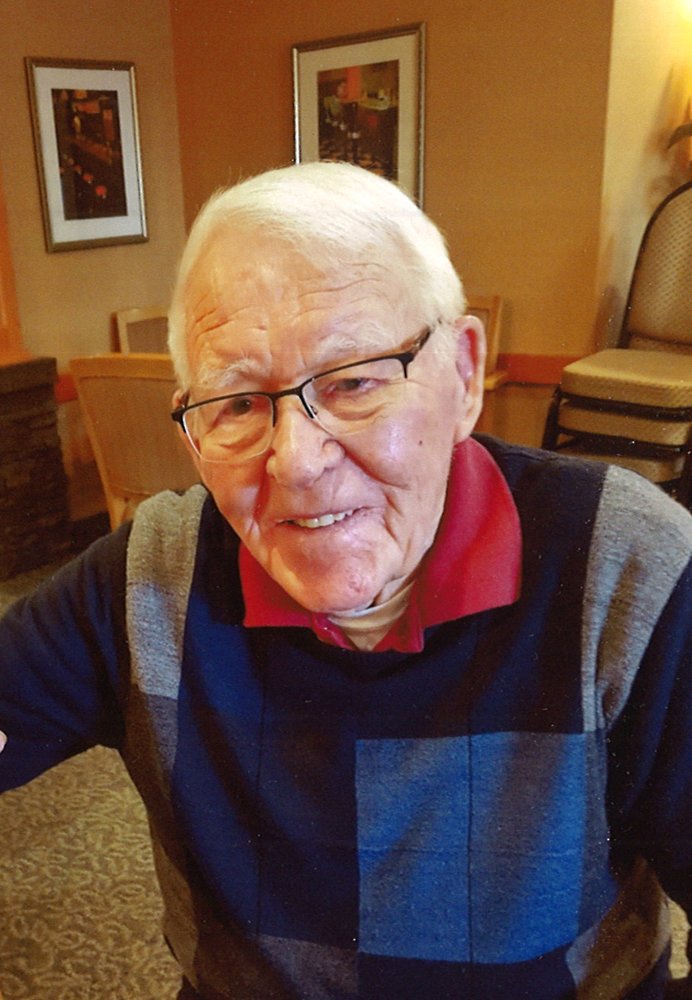 Chester Alexander BEDDOME (96) of Sherbrooke Community Centre, Saskatoon, died Sunday, May 23rd, 2021 at the Veteran’s Village of heart failure with his two daughters by his side.

Dad was born November 18th, 1924 on the Beddome family farm at Red Deer Hill, Sask, the first born to Harry and Dolly.

Dad was the oldest of five and thereby considered himself the leader!!!  He was musically inclined and derived a lot of his self worth from providing entertainment to those around him.  While living in Prince Albert and then Saskatoon, he volunteered his time and talents at care homes playing his violin for the ‘old people’

.
As a patriotic Canadian, Dad enlisted and was sent for basic training.  It was there that he was found to have a perforated eardrum and was not able to serve further.  He contracted pleurisy and spent approximately a year in the Prince Albert Sanitorium, recovering.  There have been stories told of antics that Dad and his roommate participated in.  for the next 70+ years Dad was proud to be a member of the Legion TVS Branch.
Dad worked many jobs in Prince Albert; taxi driver, delivering fuel and of course working on the family farm south of town.  He met and married Wilma in November of 1953 and soon after started his 26 years at the Sask Penn.  Wilma and Chester had two daughters; Dale and Karen.

Dad retired from the Penn in late 1979 and began working odd jobs and finished working at the Co-op Gas Bar.  Once they both fully retired, they spent a number of winters in Apache Junction, Arizona which we would say was his happy place!  They spent many a summer at their cabin at Christopher Lake.

With Mom’s diagnosis of Alzheimer’s and, the debilitation that came with that, she was moved to private care and then long term care in Saskatoon.  Dad followed and moved into Preston Park 1 in September of 2011.  This move allowed him to visit Wilma everyday.

During the next few years Dad was able to travel with us to Manzanillo, Mexico twice and a trip back to Arizona.  Unfortunatly his age caught up to him and his travelling days were done.  He was content to spend his time socializing with his friends at PP1, playing cribbage and bridge, joining in water exercises and playing music with the band he formed.

.
His health started to decline.  He suffered a heart attack; then later required a pacemaker.  It was a fall and broken hip that required a move to Hyde Park Care Home.  He received excellent care there and the staff kept him safe during Covid!

Dad’s health continued to decline over the past two years and after 32 days in hospital he was moved to Sherbrooke, Veteran’s Village on April 26th and considered palliative.
Dad was predeceased by his parents and step-mother Olive; spouse Wilma (Nee Pollock/2013); sister Dorothy; brother Ed; and all the in-laws.
Survived by his daughters, Dale and Karen, brother Calvin, sister Diane Mallett, numerous nieces, nephews and cousins.

Dad lived a very long life filled with much good health until his heart attack at 88 years.  We were all blessed with the time we had with him.

Interment will be at Memorial Gardens, Prince Albert for immediate family.  He will be laid to rest beside Wilma.  The graveside service will be officiated by Gary Kadyschuk.  Flowers gratefully declined and donations can be made to the Saskatchewan Alzheimer’s Society in Dad’s name.

Share Your Memory of
Chester
Upload Your Memory View All Memories
Be the first to upload a memory!
Share A Memory