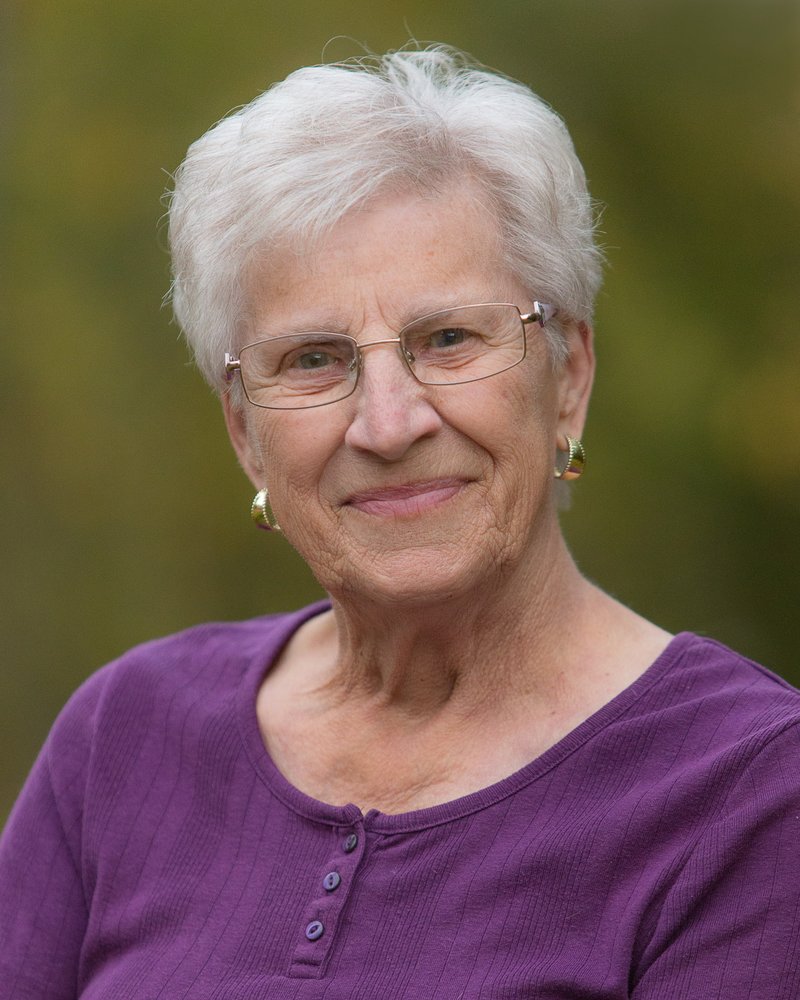 Vivian Irene Valentine (Thompson) was born on February 15th, 1935 near Crooked River, Saskatchewan.  She was the oldest of three girls born to James and Mary; her sisters were Ivy and Dorothy (Dot).
Vivian's mother passed away when she was only five years old. She quickly needed to grow up and soon learned what hard work was when she and Ivy were sent to live with an uncle, where at the age of six Vivian started milking cows morning and night. This was only one of the many chores that filled her days. In the winter Vivian and Ivy used homemade wooden skis to travel one and a half miles to and from school, if they were lucky they would catch a ride with one of their neighbours.

At the age of fifteen, Vivian was hired to work on another farm where she lived for nine years.  It was there she met Gordon, who became the love of her life. They were married in Medicine Hat on March 31st, 1959.
Vivian and Gordon farmed near Pennant, Saskatchewan, where they raised Harold (Hal), Carolyn, and Gale. These were the happiest years of Vivian’s life. She took pride in looking after the house, running the kids everywhere, chaperoning school events, keeping a huge garden, looking after the animals (cows, pigs, chickens, turkeys, ducks), working in the fields with Gordon, baling hay, and driving the grain truck. When the work was done, there were occasional water fights, football games, or trips to the river with the kids to cool off on hot summer days. Vivian took pride in running the Valentine Family Farm with Gordon, and her days living on the farm were always near and dear to her heart.
Even though Gordon passed away suddenly on December 9th, 1989 Vivian continued to live on the farm until January of 2001.   The time was filled with frequent visits from Hal and Kim, Carolyn and Tim, Gale and Shaun and her grandkids Ryan, Blair, Ashley, Sam, Jordan, and Ally.  Memories were made that will last a lifetime, including putting 100s of kilometers on the yellow trike, trips to the Cabri Pool for swim lessons, more water fights, digging holes in the snow banks, and threats with the wooden spoon.

In the winter of 2001 Vivian moved to Edson Alberta where Gale and Shaun were raising their family. She loved spending time with her two youngest granddaughters, and volunteering to help kids read and write at two of the local elementary schools.  Vivian made friends easily, and was always up for a game of cards with anyone who was willing play.

Due to declining health in January of 2020 Vivian moved back to Saskatchewan (Warman) to be closer to more of her family - Carolyn and Tim, and Hal and Kim. This was just before the pandemic hit, but she made the best of it, even though she greatly missed seeing her family.  For years she had been managing progressive health issues, which ended on the morning of July 13, 2021.  She will always be remembered for her kind words, quick sense of humor, laugh and smile.
Vivian was a strong and kindhearted woman who will be fondly remembered, and greatly missed by her family and friends.

Share Your Memory of
Vivian
Upload Your Memory View All Memories
Be the first to upload a memory!
Share A Memory