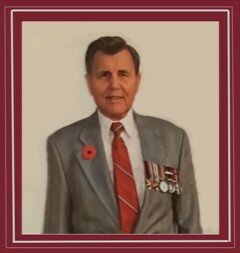 Mel Chiga passed away in Saskatoon, SK. on September 12, 2021 at the age of 98 years. Mel was predeceased by his parents; siblings; and by his sweetheart and beloved dance partner, Teri Herter. Mel will be missed and fondly remembered by his son, George (Candy) Chiga; Teri’s daughters: Tara (Rick) Ballantyne and Shelley Herter (Geoff Mulligan); and many friends and former neighbors.

Mel was the youngest in a family of nine children. During his childhood, Mel’s family spent eight years on a farm near Whitewood, SK. during the early thirties. In 1943, Mel volunteered to join the army. While in Canada, he served as a Physical Training Instructor. Overseas, he served throughout England, France, Holland, and Germany as a medic on the front line with the infantry. While in France during the major battle at Falaise, he was mentioned in dispatches.

After the war, Mel furthered his education and served 20 years with Saskatchewan Provincial Health and 10 years with Federal Public Works. He enjoyed skating, cross-country skiing, working out at the gym, and ballroom dancing. Mel often said that the happiest time of his life was the more than 40 years he shared with Teri. Much of their entertainment was “dancing cheek to cheek” twice a week. Mel appreciated his neighbors and valued the assistance they provided, particularly in his later years.

Mel’s family would like to express their heartfelt thanks to Garry, Kevin and Sue, Tyson and Erin, and Grant and Mona (with gratitude to Mona for visiting Mel on his 98th birthday). Mel’s family would also like to thank the workers at Saskatoon Home Care (especially Glenda); the Veteran’s Village at Sherbrooke Community Centre (with special thanks to Michelle, Christy, Kimberly, and Kimberly’s pup, Walter); Carla from Prairie View Cremation and Memorial Services; and Kate from the Columbarium at St. John’s Cathedral.

Mel requested that no service be held for him but if anyone wishes to honour his memory in a tangible way, a donation to one of his favorite charities (The Canadian Cancer Society, The Heart and Stroke Foundation, or the Saskatoon Legion) is respectfully suggested.

Share Your Memory of
Mel
Upload Your Memory View All Memories
Be the first to upload a memory!
Share A Memory