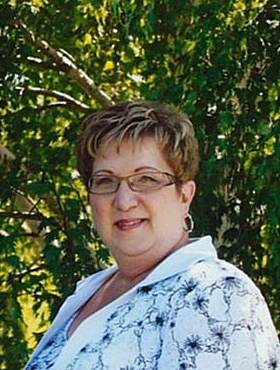 It is with great sorrow that the family of Iris Kardash of Saskatoon announce her passing on Saturday, October 23rd, 2021 at the Hospice at Glengarda.  Mom bravely finished her 6 year fight with Vulvar Cancer and went home to heaven surrounded by her family.

Iris was born to the late Harry and Anne Napady, in Yorkton, SK where she finished her schooling. In 1974 in Saskatoon she met Wayne Kardash and on October 18, 1975 they were married.  One of Mom’s last wishes was to make it to her anniversary, and with grace, Mom and Dad were able to celebrate their 46th Wedding Anniversary days before her passing. She is also survived by her two children, Kim (Eric) Johnson and Kelly Kardash; beloved grandchildren, Rachelle, Myles, and Blake; brother, Randy (Linda) Napady; and sister, Sylvia Cheveldeoff; sisters-in-law, Gloria (Jim) Kardash and Diana McBean; as well as many nieces and nephews, but she had a truly special bond with her nephew, Corey (Krista) Napady.  Iris was predeceased by her parents, Harry & Anne Napady; brother, Richard Napady; brother-in-law, Fred Cheveldeoff; as well as in-laws, Alec & Lydia Kardash.

Mom was a true homemaker, and she enjoyed to entertain their many friends for card nights or just to sit around the fire and visit.  She was an excellent Crib player and spent many afternoons at Fairfields playing with her friends.  And she loved to talk, which led her to a 29 year career working at the switchboard of City Hospital at which she made many lifelong friends.  A career she truly loved and one that was only ended by her battle with a rare form of Vulvar Cancer. Now it would be wrong to say that Mom lost her battle because she never stopped fighting. No matter how sick she was, she was always determined. When anyone else would have broken, she stayed strong. Through her, we know what resilience and perseverance truly look like. There was no quit in her. Just because she is no longer here, it doesn’t mean she lost her fight. She will be greatly missed and always remembered.

The Family would like to thank the staff at St. Paul's Palliative Care Unit and the Glengarda Hospice for their truly compassionate care.

A Celebration of Life will be held Sunday, November 7th, 2021 at 2:00 p.m. at Fairfields Senior Centre, 103 Fairmount Court, Saskatoon. Due to COVID Regulations, Masks and Proof of Vaccination will be required for entry.

Share Your Memory of
Iris
Upload Your Memory View All Memories
Be the first to upload a memory!
Share A Memory