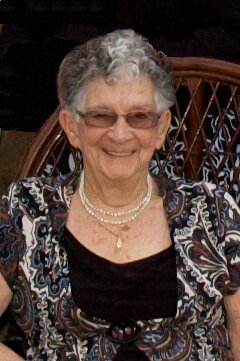 Obituary of Violett May Stalker

Violett May Stalker - Born March 14, 1920 on family farm during a Blizzard, Died peacefully February 25, 2022 at her residence.

The foregoing article was written by Mom for the Saskatoon Centurion Club Magazine.

She loved family, she was our biggest fan and supporter … a true Momma Bear.

She loved her community, worked tirelessly and was always up for a challenge. Our home was a bit of a drop in centre, the door was always open. Many a Sunday morning breakfasts were served out of the tiny kitchen above the Heward store. Just throw another pot of coffee on and cook more bacon..

She was also known to be a bit political…always enjoyed a heated debate.

She loved to Dance, that’s how we celebrated her 90th Birthday.

She loved Texas, spending 42 winters in the RGV. She especially loved her home in Pine to Palm Park in Weslaco.

She was known for her homemade bread, buns and especially her cinnamon buns. The Grandkids were always excited to see Gramma arrive and don her “muscle shirt” Serious baking about to start!

Interment and Celebration of Life will be held at a later date in Heward, Sask.

I was born Violett May Mountjoy on March 14 1920 on 35-9-9-W2nd, the youngest of four children. I went to school in Heward Saskatchewan through grade 12. I was active ln all sports available to me, ball, curling, track and field. James Stalker and I were married ln 1939. We raised 5 children: Patricia Bader (1940), Lee (1944), Lynn Ward (1946), Vonne Macpherson (1950), Penelope Stalker Coutu (1953). Jim went overseas ln 1941. His father and I farmed the land for the three years while he was away. During that time, I bought three polled Hereford heifers which started our pure bred Hereford herd. We farmed for 20 years, ln 1958 we bought the grocery store ln Heward. In 1970 we took on the store in Midale, SK.

Jim and I retired ln 1972 and started our annual trips to Weslaco Texas. We tore down the store building in Heward and used the lumber to build a duplex home at Kenosee Lake. Where ever we lived we did a lot of volunteering. In Heward, a small village, we needed a community hall. ln these years there was no money but we started anyway. We formed the Heward Board of Trade, a very impressive title, that signed up both village and farm people. For $25.00 or 25 hours of work you could become a member. It took eleven years of building and earning money, We had bakes sales, home-grown entertainment, raffles, and an annual 2-day sports day. We ended up with the hall that was the best in that rail line and it was paid in full. One young fellow said "it would be a sad day when It was finished as the whole community had so much fun while building it".

I was the secretary-treasurer of the Board of Trade for eleven years until we moved to Midale. Midale was a larger town with no decent Hall. All the weddings, anniversaries, and birthday celebrations had to go to Weyburn or Estevan taking all that money out of the community. Midale started working on a Civic Centre. I called a meeting of local ladies and we started a catering club. Five or six ladies each offered to head up a group. We passed the phone book around and each picked someone they'd like to work with. This continued until they each had a good group. Each group only worked when their turn came up. After 40 years the group ls still going.

We retired to Kenosee Lake. Then there was another Hall committee. We settled on a log building for a Drop-in Centre. I was on the finance committee as well as other committees. Thanks to Federal and Provincial grants, we got a good start on the first log Drop-ln Centre in Canada built by senior citizens. Of the one hundred logs needed I pulled the bark off ten of them. And again we were into flea-markets, yard sales and other fund raising for that building. It is nice to look back on all these communities and know you have left your mark.

It is 2011 and I still go to Texas in the winter. There has been committee work and other volunteer jobs to do there as well. From Kenosee Lake I moved to Saskatoon in 2006. I lived ln the Liberty Court Condominium first then sold it and moved to Preston Park Retirement Residence in April of 2010.

Share Your Memory of
Violett
Upload Your Memory View All Memories
Be the first to upload a memory!
Share A Memory